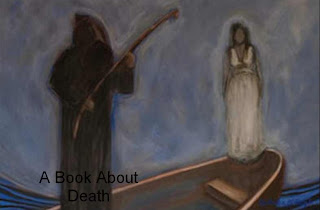 Kathleen McHugh sent us a note about the exhibition and what it meant to her, and she agreed to share it here.  Her work in the exhibition can be seen here, on the site and to the left. It is called "Those Who Pay The Fee."

Matthew:
Since I read the  post  saying that you had some negative reactions from a couple of participants about the project, I want to communicate my reflections about the project to you. First, I am sorry for the loss of your mother.  I think that on some level, we become orphans when our parents die, no matter what our age.

For many years, I have been torn about the idea of artistically expressing death as it has visited my life because I was afraid I would be using other people or exploiting some very raw topics as a way to promote myself through a caused-based marketing scheme. (I mean, that is the way it seems to me). When I saw the notice of your open call, I had gone from a point of emotional fatalistic nihilism, to thinking, "wait a minute, even the most primitive people intuited 'movement' after physical death" ... why is there so much mythology about 'crossing the river'? That thought came to fruition in a series of paintings around the theme of "movement after physical death, but why and where, and how the movement happens who only knows....???"  I also have to confess that I am writing this email as a practicing Orthodox Christian coming out of a tradition of liturgies, poetic chants and icons articulating and conquering death from every angle.- Which is NOT, in itself, a cheap fix for feelings of emptiness and anguish, I believe.

Sometimes I chastise myself because I think my attitude about death "should be different," and that any scrap of faith I might have is simply an intellectual posture. For me, your project has created a cyberspace place I can go to feel in the company of others in an humbling  way that feels real. I am grateful for that, and believe that is one of the reasons your project is widely received and is growing. Someday, I want to be able to share it with the other people in my life who are not ready to look at it yet.

Since you're from the U.S. and have a common knowledge base about one topic of death I have not expressed artistically, I would like to disclose it now in this email. I have not used it as creative material due to fear of appearing to sensationalize the suffering of someone else, shirt tailing major issues as a way to draw attention to personal art making, or being used by unforeseen political voices with whom I don't agree.

This has happened before. ie.,"Please don't take up MY issue as evidence to support YOUR cause!" But, most of all, because my deceased husband, who was a very private person, would be furious. He spent much of his energy trying to keep that part of his life hidden. After he thought that he got his mind together regarding his experience in Vietnam, we got married. We had three children. As soon as his life seemed stable, he started mentally deteriorating and we found ourselves total hostages to the effects of what is now called PTSD. He developed elaborate coping mechanisms to keep anything related to Vietnam out of his conscious thoughts.

I know all this in retrospect. At the time, it seemed as if life was just relentlessly stressful and crazy with no way to change anything and no  hope in sight. Then, (while the children were pre-teens and teens) in 2002, he got a "you have less than six months to live" cancer diagnosis. That threw us all into shock.

I took care of him at home (not having any nursing skills... just dealing with it and learning as I went). I had to quit teaching art, which (as you know) doesn't pay that much anyway. We lived on his disability income. Then, (finally one of the points I wanted to make in this email), as his physical strength waned, all the memories he kept at bay through his elaborate defense mechanisms came to the forefront. While he was physically dying, he was going in and out of war experiences in his mind which made him suffer both mentally and physically. We ended up getting extremely good help from medical doctors and VA psychologists who reduced his agitation through medication and some intervention. However, he died at home without ever having a meaningful conversation with anyone about anything that most affected him. He took it to his grave.

I found myself a widow with three children. His death was determined to be directly connected to service in Vietnam at a time the US was gearing up for Iraq. I felt numb and depressed.   I went into survival mode and managed to get our three children to adulthood. Now the youngest one wants to go over the year of his death in detail to try to get it straight in her own mind, so I am currently remembering the year he died in great detail.

Last year, (2008) I married an extremely thoughtful supportive man and am transitioning into building a new life. However, it can't be one that erases the past. That would be insane. Somehow everything needs to be knit together. This email isn't even expressing what I am trying to say. It's something about how your project has created a sense of sanity and reality for me since the topic of death isn't something people want to listen to on a micro-level.  When I saw the stream of the opening, I thought that your project is responding to a need in people. There must be a lot of people who need a place for death in their lives and your way of providing it seems 'real' to them. It is for me.

Thank you,
Kathleen
Posted by MATTHEW ROSE at 8:55 PM

Email ThisBlogThis!Share to TwitterShare to FacebookShare to Pinterest
Labels: A Book About Death, Kathleen McHugh


Dear Matthew and Kathleen,
I read this:
Matthew:
Since I read the post saying that you had some negative reactions from a couple of participants about the project, I want to communicate my reflections about the project to you. First, I am sorry for the loss of your mother. I think that on some level, we become orphans when our parents die, no matter what our age.


And if you lose your mother, it is a kind of loosing a mirror. And this experience give the pain.

But I do not want to tell and reflect on this blog these delicate subject.
This blog seems for me an enormous starting point with an enormous quality of expression of yourself, with an enormous power of visible pictures .
I liked the variety of images. Perhaps animating the whole images to a movie and reading the text!

I feel the death of this blog is if you scroll down. And down and scroll is sometimes painful. Sorry for my english.

And I can imagine a kind of printed book, if you take photographs of the computer screen.