A Book About Death – MoMA Wales, April 2010 – Sol Lang from sollang on Vimeo.

As part of the new exhibition organized by artist Sonja Benskin Mesher, RCA, several artists were invited to produce new pieces to augment the show and draw upon a range of experiences.

Sol Lang, the Montreal-based artist, contributed a mixed media, hanging mobile, consisting of three pillow-like panels representing a six-page book about death. The subject is a commentary on the destruction of our forests, symbolizing the imminent self-destruction of mankind. The three pillows are printed on with photographic images of cut down trees from the "Ravaged Forest" series and superimposed text. They are all sewn together with colored threads, hanging in an unrolled scroll-like fashion, from a real tree branch shaped like a wishbone to represent an optimistic plea for our future.

The text reads as follows:

"In my mind I conjure up images from post holocaust documentary films of the death camps taken by the allied forces. Bodies piled up one on to of the other, as the bulldozers shovel them into the massive graves. Trees symbolize life. Cut down, they give me an ominous feeling that foreshadows an end of humanity."

This art piece was created for the "A Book About Death" exhibition, April 27th to May 8th, 2010, to remain in the permanent collection the Museum of Modern Art, MoMA-Wales, UK. Sol Lang website: http://sollang.com/Sol_Lang.html
Posted by MATTHEW ROSE at 7:47 AM No comments:

Writer, journalist, artist Jody Jenkins and his partner Mark Claywell, produced American Jihadist, a 68-minute documentary about the life of Isa Abdulla Ali, an American Jihadist.  Shown at the Slamdance Film Festival in Park City, Utah this past January (2010), the film earned the top prize for Best Documentary.

Jody and Mark contributed a piece for A Book About Death, and they say that in many ways, "the film is about death. The film is about someone who fought  and died – Isa was declared clinically dead – for his religion." This phenomenon – an American Jihadist – is placed directly in the face of the viewer.  Web site: http://www.americanjihadist.com/
Posted by MATTHEW ROSE at 3:02 PM No comments:

Kim Triedman, a novelist, poet and artist in the project, A Book About Death, will read from her new collection Accomodations on May 20 at The Atomic Bean Cafe in Cambridge, Massachusetts.  The reading is part of the well-attended Text-in-Between series. Admission is free.

Accomodations is the name of her newest collection which she describes as "a sharp slice at the domestic front." 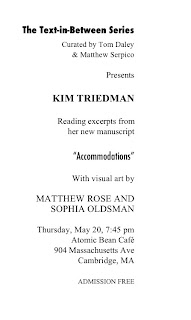 The author also recently organized and read at Poets For Haiti, a collaborative reading to benefit the Partners in Health organization and the people of Haiti that took place on February 23, 2010 in Boston. (Link to the Forum reading here).

Visual art by Matthew Rose and Sophie Oldsman will accompany Triedman's reading at The Atomic Bean Cafe.  If you are in the Boston-Cambridge area in May, please attend and/or send this link to others who would be interested.
Posted by MATTHEW ROSE at 8:08 PM No comments:

Email ThisBlogThis!Share to TwitterShare to FacebookShare to Pinterest
Labels: A Book About Death, Kim Triedman 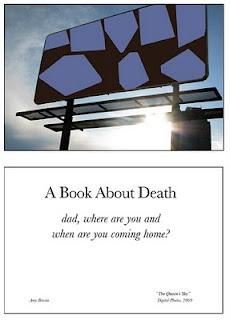 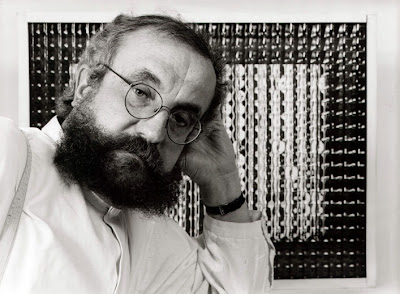 Visit Archivio Francesco Conz.
Posted by MATTHEW ROSE at 9:23 AM No comments:

Artist Ivana Rezek organized a second exhibition in the old Yugoslavia, this one in Sarajevo, a city that has known an enormous amount of death over the last few decades.  Below is the text in Serbo-Croatian about the exhibition from a local magazine. 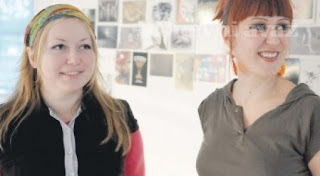 Nataša Stanišić is the main organizer for the project in Sarajevo (see her mail-art blog Universal Language http://universalartlanguage.blogspot.com/.

Ivana Rezek and everyone involved in the project A Book About Death would also like to thank the ASA Gallery for letting us use their space for the exhibition.
Posted by MATTHEW ROSE at 9:08 AM No comments: 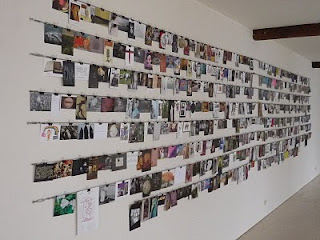