Cecil Touchon On The End Of It All: Vision Of The Valley of Souls [27] 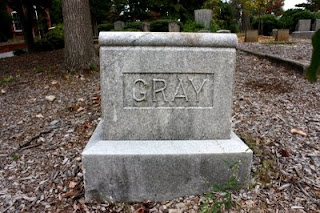 Cecil Touchon, The Fort Worth, Texas artist, performer and curator of The Flux Museum, reflects on how it will all go down in the end.

I think about death frequently. I have been contemplating the subject since the age of 14 when my younger brother Phillip, who was nine, died on a Friday, the 13th of June, 1969. He fell from a train trestle and broke his neck.

I grew up Catholic. I attended nine years of Catholic private school. I was an alter boy and the whole bit. I even considered becoming a priest except for the problem that I liked girls a lot and wasn’t planning to give up the opportunities of having sex, falling in love and all the other tragedies of life.

On the day after my brother died I went to the school fair. Back then the traveling carnival would come around at the end of the school year and set up all the rides and games and everyone – especially kids – had a great time. I had also just graduated from the 8th grade and finally out of elementary school and ready for high school. I was feeling pretty good about that except for the problem that my little brother had just died. I wanted to get away from the grief at home and have some fun but the word had already spread and I mostly had to deal with people consoling me where ever I went. This took the fun out of what should have been a great graduating weekend that I had been planning with my friends for several months. Instead, death came knocking and took the color out of everything.


When my brother died I felt as if we were on a stage and somehow he fell off of it never to be seen again. I guess I was sad about it, I remember being depressed, speculating that if a nine-year old kid can die just like that, with the snap of a finger, where was the pay off in working toward achieving anything in life? After all, no matter what, I figured, we were all going to die. And what happened to him anyway? I had always figured that the adults – and certainly the priest – knew the answers to all the heavy questions and that I really didn’t need to worry about it – I was a Catholic, I was covered or so they tell you. But when I started asking tough questions and tried to peer behind the curtain, I realized that neither my parents nor anyone else had much of a clue as to what came after this business of life. It was as much a mystery to them as it was to me. When I realized that, I became alarmed. Maybe I wasn’t so safe after all. 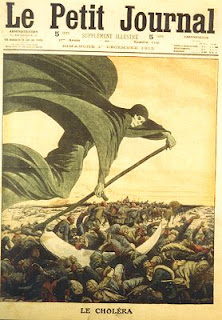 For Catholics, the afterlife is complicated. Getting passed the the Pearly Gates, statistically, seems unlikely, akin to the percentage of people that make straight As in high school. The more my mind wandered over my brother’s fate and his place in the afterlife, the more depressed I got.

Then one day some many months later, something amazing happened. If you talked to a psychologist he or she would say that I had some sort of psychotic episode – “a loss of contact with reality.” That seemed reasonable; I was a young Catholic struggling with death. Catholics have their own highly ornate version of reality that is much more fleshed out that anything that the field of psychology has yet to come up with. The field of psychology is so puny and underdeveloped, compared to Catholicism and its history, psychology is just a page in a book. Catholicism, on the other hand; an encyclopedia.

So...I was kneeling next to my bed scribbling away on a homework assignment. Kneeling, not because that is what a good Catholic ought to do, but because I didn’t have a chair in my room or, if I did, it was, no doubt covered with dirty clothes. All of the sudden, a brilliant white light filled my room. A flash, like a a bolt of lightning. Everything turned white; appearing in the room two beings made of light with long flowing gowns – angelic beings – appeared. I stood up, in between them; one was to my left, the other to my right, and we disappeared into some kind of a void, a nothingness.  Then all of the sudden we were in some new place; present, past or future, I couldn't tell.  But I knew I was to meet someone, and when I did, I spent time with this person, a man.  We talked; then the two angelic beings returned to retrieve me and carry me off to another place. Soon, I was in Middle Eastern-looking places; it seemed I would spend days or weeks or perhaps months with this or that person I was supposed to meet, a person who, I believed, would teach me things, tell me about life, or death. I can not recall any specifics but this went on for a very long time – going from one place to another. When I was finished in one place the beings would arrive and we would disappear in a flash of light only to reappear at the same moment in a new place where they would leave me. 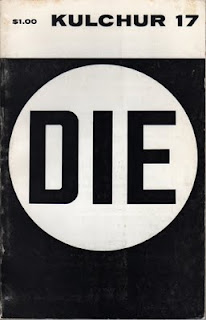 This continued for perhaps a long time, I can't remember, but I do recall that I became so accustomed to this kind of life that it seemed natural. I forgot that I was a 14-year old boy in his messy teenage room doing his homework. At the end of these visits the two beings took me to a high mountain top and with a kind of mental telepathy told me to look down into the valley below, just as the being on the right passed his arm from left to right in a sweeping motion. I looked below and there before me was a vast expanse that stretched out as far as the eye could see and beyond filled with all of the people who had ever lived or ever would. Above me, perhaps 15 or 20 feet high, was a bright seething white cloud that stretched out in all directions across the sky. From every person in the valley up to the cloud above there extended an endless number of ladders – one for each person.

When I gazed upon the valley below I could see a great commotion of people going here and there. My mind seemed to soar down the side of the mountain toward the valley so that I could see it in detail. Each person was dressed in clothing that represented his or her sense of identity, of who they were, from kings to paupers. At the base of each person’s ladder were a pile of objects that represented the various things that kept that person in the valley. The things were some sort of attachment or desire or fear perhaps. What ever they were, these items could not be carried up the ladders with them and yet they could not leave these things behind. There were even thieves who went around stealing these items from others, and other thieves who were stealing from the thieves when they were out stealing from others. 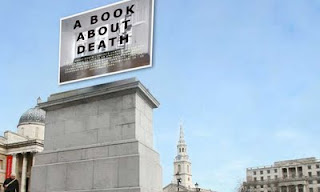 It seemed that everyone’s root purpose was to climb the ladder up into the cloud above which I presumed represented God or the Divine consciousness. Everyone in the valley seemed to have forgotten about their ladders except for a place to keep their most prized objects except every now and then when, off in the distance a great rumbling got louder and louder causing everyone to become terrified, running to their ladders for safety. Then the rumbling reached its peak and passed over like a wave, leaving everyone to go back about their business. And soon people returned to acted as before until the next rumbling wave came through.

Then my attention fell upon those who were on their ladders and they were of several kinds. The first was a person who would climb a few steps up his ladder. He looked up to the great distance above, then down to the collection of items below and started shaking with fear until he returned to the ground to be with the objects of his desire. Next was a man who climbed up his ladder just far enough to get a good overview of the crowd and the valley. Then he returned to the ground, not out of concern for his objects, but rather to use his experience on the ladder as a way to teach others about what he saw from that vantage point. After this I saw a person who had freed himself from his attachments and set his sights on the cloud above but he became so enamored with his climbing that, as he sped up his climbing and, intoxicated watched himself doing it, that the ladder started going downward at the same speed that he was climbing up until he wore himself out. After this he noticed that he had gone nowhere and so he started over, slowly and soberly climbing. Then my view widened out and I noticed people of all kinds at all different stages of climbing their ladders and the higher they went, the more their clothing lost any sense of uniqueness and individuality suggesting that their ego was slowly fading away. Toward the top of the ladders I saw an old bearded man with nothing more than a loin cloth. He was moving up the ladder very rapidly with his eyes on the cloud above and a look of ecstasy and peace on his face. Then I noticed that there were a few ladders that were empty indicating that some had actually made it up into the cloud. 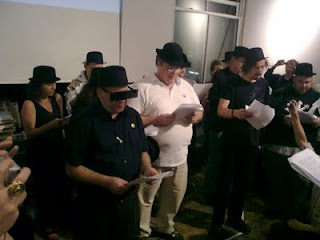 And when I saw all of this I knew that this was the nature of life and that there was really nothing to fear, there was only our attachments and our ladder that we must one day climb should we choose to. Then all of the sudden I was back in my room kneeling next to my bed with my hand moving between the dotting of an "i" and the crossing of a "t." I looked up in shock and then looked back over the long experience I had just had and the entire memory of this vision seemed like a screen of sand that all fell to the floor, and most of the details of the experience washed away except for what I have stated here.

From that moment the depression that had been hovering over me like a cloud completely dispersed and my feeling of joy returned in full force. That was the beginning of my spiritual journey and the end of my deep fear about death.  – Cecil Touchon, Dallas-Fort Worth, Texas
Posted by Cecil Touchon at 9:56 PM