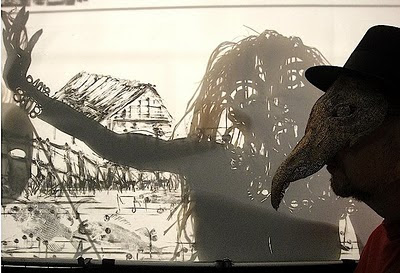 "I've always been interested in the creation myths of different cultures," explains William Evertson, the inspiration behind Seeking Kali along with Susan Shulman and Ria Vanden Eynde.

"Especially the common thread that god or the gods make perfect worlds yet evil creeps in with the introduction of man (or woman) In Kali Yuga, although I conflate several characters; Kali works to create a perfect world but is beset by a demon intent on introducing mischief and evil."

Kali, writes Evertson, "...becomes a mere broker in the West of commodities and services. At times she has been a New Age movie distortion or a symbol of feminist rage. Many times this cross cultural borrowing seems far removed from the mystery and paradox present in an archetype that is mother and goddess, yet also a symbol of destruction. Perhaps more close to the truth is the statement, "The most common modern Hindu perspective of her is largely symbolic. She is revered for her no-nonsense way of eradicating negative thoughts and bad habits in the minds of her followers. In other words, she will lop off your inflated ego in no time flat if you ask her, and she offers no guarantees that the process will be painless."

Photo: Original ink drawing on acetate, used for the performance.

The Seeking Kali Theater piece on video is viewable here.

The shadow box theater piece debuted at Ray Johnson & A Book About Death at CW Post College's SAL Gallery on Long Island. This project grew out of creative relationships between artists involved in A Book About Death.  The resulting project, Seeking Kali, has become a full blown exhibition/project unto itself. Contribute to Seeking Kali or see the works thus far submitted here.
Posted by MATTHEW ROSE at 8:52 PM

This image is excellent.... though I wasn't there the energy of the event is strong... many expressions came together and we'll feel the resonance this show is another cherished "repeater" (see communications definition) in the great art exhibition of our lives. Pass it on.