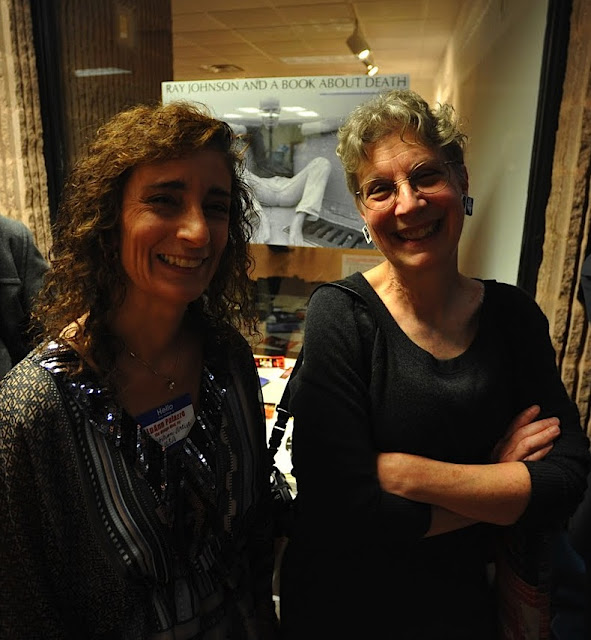 The opening night of Ray Johnson & A Book About Death at CW Post was a sensational coming together of more than 1000 artist works and crowds that came, saw and performed. 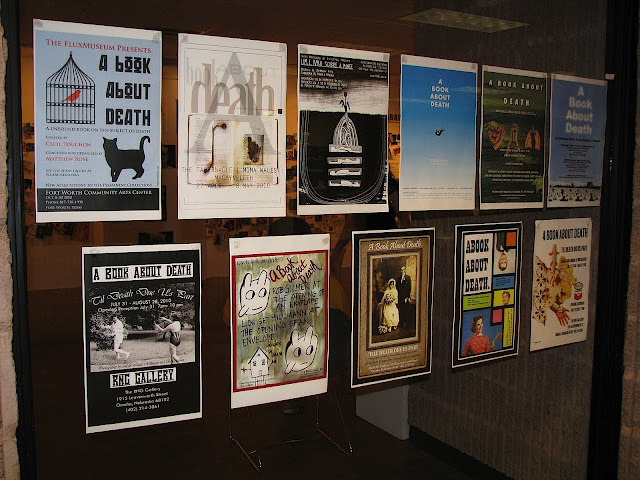 The NYC works, first exhibited at the Emily Harvey Foundation more than a year ago in September 2009, were shown along with almost 500 works mailed in from all over the world.  New posters were produced, as well as a full slate of performances.  (Photo below left; see full the program, here). 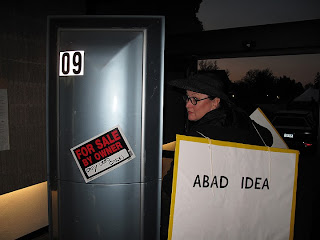 Artists dressed up, or in some cases, took off their clothes. A tableaux vivant of a mother and child (actually, a large adolescent) performed quietly within the exhibition space.  Outside, artist Honey Millmann protested ("Nothing!  I'm protesting nothing!" she said), and then switched to proposing something different with a sign that said "ABAD IDEA."  A man showed up with a used coffin (for sale: "Only used once."), while most came dressed like the living dead, the exhibition opening just days after Halloween.  "It's the Night Of The Living Fluxus," someone explained. 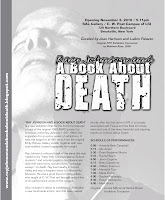 Ray Johnson was all about creative connection. Today, 15 years after his death, the bonds of his creative legacy and the bonds of friendship here at C. W. Post are still strong and defined by a sense of shared creative history and purpose. The evidence is plain to see through this exhibition.

Many of the artists taking part in this exhibition knew Ray Johnson personally or were correspondents of his, while others are alumni, faculty and students of the university. Even more are part of a creative global network who have been inspired by Ray’s work and moved by the universal theme to answer the call to communicate.

We would like to thank Matthew Rose, the father of the original ABAD Project in 2009, and all those at the C.W. Post Campus of Long Island University who helped make this exhibition possible. Our special thanks go to Dean Benjamin Moore of the School of Visual and Performing Arts, who, when approached with the idea said simply, “Do it!”

Most of all, we feel deeply grateful to our international roster of contributing artists for sharing their vision, their thoughts, their humor and their remembrances of loved ones lost. The outpouring of love and dedication to this project, and to this show in particular, has been quite literally overwhelming.

Art is a celebration of life lived to its fullest and to quote poet W. H Auden, “Art is our chief means of breaking bread with the dead.”