Letter From Mark Bloch : On My Participation In A Book About Death [43] 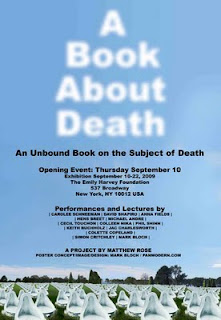 Mark Bloch, artist, performer and author, reflects on his piece and participation in A Book About Death, citing Ray Johnson as the center of his performance art at The Emily Harvey Foundation the night of the opening.

I voluntarily made a poster for A Book About Death by taking Marcel Duchamp’s art work “Fountain,” a urinal turned on its side and submitted for inclusion in a 1917 art show to which anything was supposedly acceptable, and substituting it for the many crosses that disappear into the horizon as grave markers in Normandy, France, where D-day occurred. Duchamp hailed from Rouen, nearby, and so I thought it was a fitting tribute to both the heroics and futility of death as well as Duchamp, the fountainhead of the avant garde for me and for the generation that came before me.

But the true story of my involvement with the recent A Book About Death links not directly to Marcel or to graveyards but to three “books,” none yet published and all conceptual on some level or another. First and foremost, the American artist Ray Johnson (1927-1995) the founder of the New York Correspondence School deserves all the credit for creating the concept of A Book About Death because he was really onto something when he came up with the concept in 1963.

Between March of that year and February 1965, he sent out 13 pages or so of something he called A Book About Death. In framing one piece of a paper as one page of a conceptual book, he anticipated many literary developments of the four decades that have followed. Ray Johnson’s A Book About Death connects to hypertext, cyberpunk, the internet, as well as devices like the Kindle, a device that is an accumulator of electrons that shows its user pictures on a screen of what can be thought of as a book. But the Kindle, one of the possible signposts of what the future of reading will be like, cannot show us an entire book. It can only show us one page at a time. 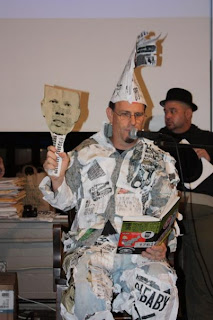 The second “book” is the biography I am writing of Ray Johnson. In 1995 when he died, I had already been trying to piece together the details of his life for my own edification. Since then I have completed dozens of interviews about him and thousands of hours of research into the details of his life and his activities. I have many boxes of files about him, the art he sent me, notes on our phone calls which he considered part of his art, and copies of what I sent him. There are files on the many people he was involved with and the names he dropped. To be writing a book about Ray Johnson is to be indirectly linked to almost everything in the world and also the afterlife. My book about Ray is a huge undertaking that only gets larger. Some day I would like to stop researching my fascinating subject and start writing but I am not sure how to define the boundary between these two activities.

The third “book” is Three Ugly Islands my own three-part autobiographical work of temporal distortion, influenced by many things including the concept of "The Death of the Author" by Roland Barthes. In my book the hero Martial Panterel is a performance artist and secret Kaballist who knows very little Hebrew but grabs little pieces of things that remind him of the Talmud, a link between text, the spiritual realm and pictorial writing, because he believes his superimposing the oeuvre of Marcel Duchamp over Jewish mysticism holds the key to his dilemma. Less the “writer” of his book but more someone determined to impose order over it, he sets off on the insurmountable task of moving his own unwieldy four dimensional scrapbook, which he calls The World Accordion, containing ephemera, documentation, explanations and detritus of his own life, from place to place, in search of clues to his existence and the plot of his story which is increasingly overwhelming and confusing.

Thus, my original thoughts about a project that would use Ray Johnson’s concept of A Book About Death as a “jumping off point” were pretty much what manifested themselves almost a year later after I suggested to Matthew Rose that to unify the project, and as an homage to our mutual friend Ray, that participants in the project could include the words A BOOK ABOUT DEATH on every card, identifying itself as part of a whole. I moved in that direction when I made my own card about Ray and his original idea. When the project was complete I noticed only a dozen or so other people referenced Ray in their cards. The rest that did not were mostly about death, also an appropriate subject, of course. 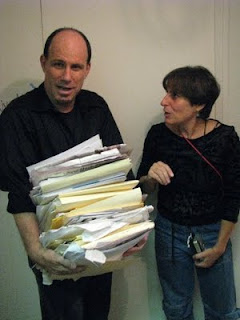 The other idea I proposed to Matthew Rose, the project’s organizer, was that there be some sort of panel discussion on Ray and his “book” concept during the run of the exhibition. He did not follow that suggestion but he did invite me to perform at the opening, for which I was grateful. This resulted in my appearance there as a one-man panel discussion in costume as Ray Johnson’s A Book About Death itself. I had glued dozens copies of the loose pages of Rays book to myself until I resembled a Michelin Tire Man of my own literary aspirations.

In the crowded gallery space, stripping to my underwear, I began the performance when I put on this immense costume, which my wife Amy Scarola helped me transport to the gallery by taxi. I suppose it really began earlier that evening, when I decided to carry with me to the gallery by subway, thousands of pages of my Ray Johnson research as part of the piece, muttering to the other passengers like a crazed paper-bound gypsy and even dropping the pile at one point on the subway floor. Prior to that, standing on the subway platform, combining all my thoughts on the subject of the past several months, I had composed a text to read in thirteen parts or sections called “books.”

Once the performance “officially” began with my introduction by Matthew Rose, I was joined by Blbiana Padilla Maltos who I had spontaneously asked to assist me by handing me each of the folders of my research one at time as I listed them. I felt like a paper-pushing Harry Houdini with Bibiana as my stage assistant. To end the performance I had made a decision to blow my papers with an electric fan, in a move that hearkens back to a performance Jean Dupuy, a former residence of this very gallery space at 537 Broadway, who once blew pepper on an audience through a vacuum cleaner.

Performing on the same bill as Carolee Schneeman and following Brandstifter's Keith Buchholz’s and Cecil Touchon’s conceptual pieces was an honor. I enjoyed all of them a lot. I predicted in the press release that this event would be a terrific show and a Happening and it was. 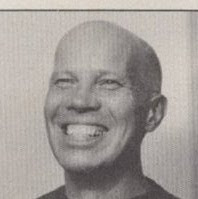 As I alternately stood and sat in that suit, reading from my performance “score,” just as I did when I composed it, I let Ray lead me from the grave, something I spoke about in my piece. After all, the late Mr. Johnson had made death the center of his work and my own mystical leanings view the connection between life and death as an illusory veil always waiting to be penetrated, in both obvious and not-so-obvious ways. I did my best to penetrate it that night to keep Ray centered in the overall scheme of things which I thought was important to the largely uninitiated audience. An awareness of Ray, his communication art innovations and his connection to mystery are sure to be helpful when considering any “book” about “death” or any A Book About Death.