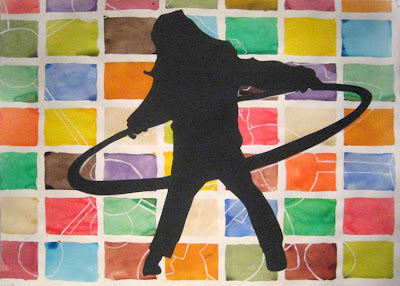 James Meyer, a New York painter and contributor to the original ABAD exhibition, takes his newest works to Morgan Lehman Gallery in NYC in After Kafka.


From the gallery: "The strange, distant world of childhood memory is a consistent theme in the work of James Meyer. While never explicitly implied, the autobiographical nature of the artist's own childhood, in 1960's suburban America is the primary source of inspiration in his pictures. But while these images, culled from seemingly personal photographic sources are the choice of the artist, they appeal to the viewer as both instantly recognizable memories from their own shared histories.
"Using a variety of media such as paper, wood, and brushed aluminum, Meyer creates monochromatic sculptural paintings that utilize repetitive images of children in motion and at play. In the case of his wood and metal works, negative space is created directly by the white walls of the gallery. His imagery is often repeated serially in different scale, material and size elevating the subjects to an iconic status.

"The black silhouetted image of a young girl hula-hooping set against a grid background of candy-colored squares may not seem like a particularly ominous image, but in this work by Meyer, a palpable sense of dread is conveyed. As the viewer approaches the work, a topological “ball and stick” molecular model rendered in the negative is revealed. The cognitive association between the girl and the molecule range from the innocence of an elementary school science class to the horror of complete nuclear fallout. It is this juxtaposition of disparate, but psychologically linked images that is of primary concern in the artist’s work."

The exhibition opens on November 18 and runs through December 23, 2010.  Click for info.

See the interview with James Meyer: A Sunny Mascacre Of Innocence.
Posted by MATTHEW ROSE at 5:41 AM