Click the article to enlarge and read.
Posted by MATTHEW ROSE at 12:32 PM No comments:

Email ThisBlogThis!Share to TwitterShare to FacebookShare to Pinterest
Labels: Newday, Ray Johnson And A Book About Death 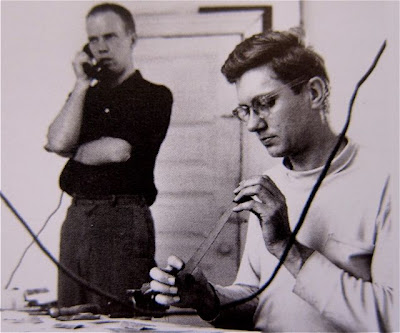 As a special preview to the CW Post exhibition Ray Johnson & A Book About Death opening on November 3, 2010, Joan Harrison has set up a Ray Johnson phone-in line.  Yes, call Ray Johnson!

In the United States, you simply dial the following number and follow the prompts to hear Ray talk about A Book About Death, Correspondence Art, Making a Rectangle, How to Become A New York Correspondence School Member and other wonderful things from the iconoclastic artist.

When prompted, enter the stop number listed. The Stop Numbers are as follows:

As a footnote, I still have some of Ray's messages recorded from 1990-1992. One of my favorites is: "Hello Matthew, This is Andy Warhol calling from Heaven...."

Have any Ray Johnson phone messages? Let us know...

Photo of Ray Johnson and Richard Lippold, 1954, thanks to: Mondo.

Email ThisBlogThis!Share to TwitterShare to FacebookShare to Pinterest
Labels: And A Book About Death, Ray Johnson, Richard Lippold 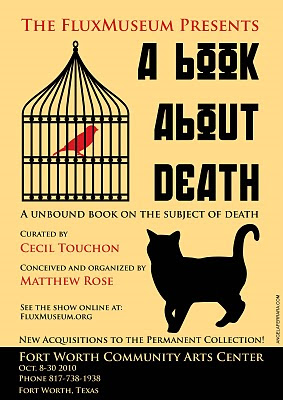 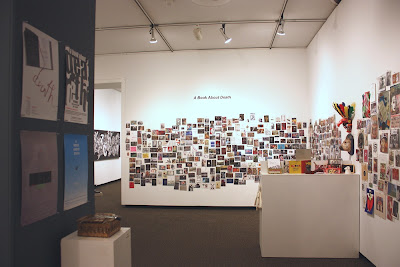 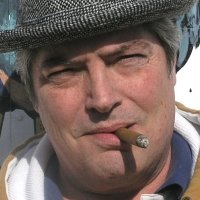 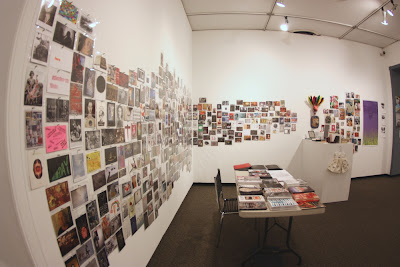 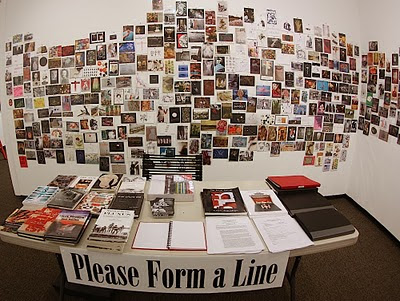 The Fluxmuseum opened up in Texas today with a massive exhibition devoted to games and gew gaws as well as the A Book About Death archive set and new works.  A truly amazing exhibition, spearheaded by Flux Meister Cecil Touchon.

Take a moment to check out the initial installation shots and since Cecil paid for this out of his own pocket, please consider tossing $10 or more towards defraying his costs. You will see the PayPal button on the link page (to the right).

Photo: Fluxhibition #4 - Table with catalogs for sale and a Book About Death installation in the background.
Posted by MATTHEW ROSE at 6:30 PM No comments:

Caterina Verde, the artist who designed the ABAD Wall featuring all works in the original exhibition, opens her exhibition The Lucretian at White Wash Studio in Amagansett, New York, October 9, 2010.

The exhibition will include drawings, watercolors, texts, photos and video.

The Lucretian is the embodiment of the Epicurian poet's master poem - "De Rarem Natura" or, "On The Nature of Things".  The Lucretian holds in his gaze the thoughts he expounds in his poetry: that nothing comes from nothing; that the natural world is made up of atoms and void and no more or less.  He holds an abhorrence of superstitions and cruelty justified by religion, yet he is devotional in his adoration of Venus.

The Lucretian is the minuteae of movement that allows us to place our thoughts and projections on him and this is determined by the meaning based on our understanding.  For more information see the gallery here: http://whitewashstudio.net/
Posted by MATTHEW ROSE at 6:30 AM No comments:

Email ThisBlogThis!Share to TwitterShare to FacebookShare to Pinterest
Labels: Caterina Verde, The Lucretian 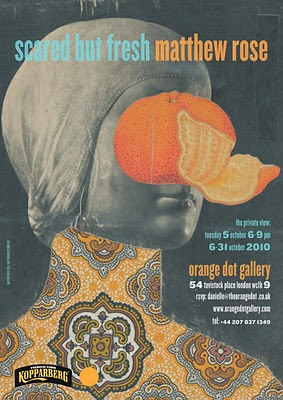 SCARED BUT FRESH: An Exhibition of Collages and Terribly Unusual Objects from Matthew Rose opens at The Orange Dot Gallery, in London Tuesday October 5, 2010. The exhibition runs from October 6 through 31 2010.

OPENING : TUESDAY 5TH OCTOBER / 6PM– 9PM, PLEASE RSVP (ESSENTIAL): danielle@theorangedot.co.uk
THE ORANGE DOT & SCARED BUT FRESH will also participate in the BLOOMSBURY FESTIVAL. DATES: Saturday, 23 October, all day; Sunday, 24 October, all day.
Along with the works on display and the exclusive prints, signed exhibition posters and copies of Masters: Collage will be available to purchase. Plus, as mentioned, there will be terribly unusual objects. "Some are made of wax," says Matthew Rose.  "Some are made of wood and have batteries."

Keep Calm Gallery will also debut a new print, Anglais, a signed and dated unlimited edition in conjunction with the exhibition.

For a preview of works and details on the exclusive prints created for the exhibition, please visit the gallery website: http://www.orangedotgallery.co.uk