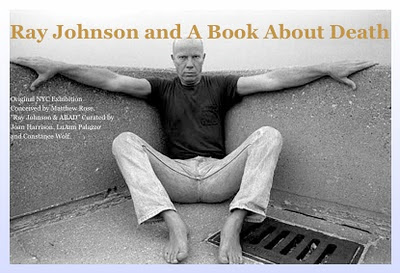 An Open Call to Artists to Contribute to RAY JOHNSON & A BOOK ABOUT DEATH (ABAD)
This new ABAD show will open in the SAL Art Gallery at the CW Post Campus of Long Island University in Brookville, NY, and run October 31 to November 4, 2010. Submit one 4"x 6" artwork in any media on the theme of death/life.

Please include the words “A BOOK ABOUT DEATH” on the front and your name and your e-mail address/website URL on the back. The work may be sent in an envelope for protection or mailed as a postcard. All submitted work will become part of a permanent Ray Johnson ABAD Archive. It will not be returned.

You must submit both a physical work and a virtual one to be part of the project. Every submitted piece will be posted to theexhibition blog.

Submit a 4x6 jpg of the image with your name and e-mail and or web URL to: LuAnn Palazzo at DesignDivaNY@gmail.com

“A BOOK ABOUT DEATH” (ABAD) is an unbound, un-paginated book produced by artists worldwide. The original project was conceived by Matthew Rose who invited artists to contribute 500 identical postcards on any aspect of the theme of death. That show took place at the Emily Harvey Foundation Gallery in NYC in September 2009. The exhibition was a tremendous success, attracting hundreds of visitors to the Soho gallery.

Since then, the ABAD project has taken on a remarkable life. It continues to travel the world, appearing in museums and galleries across the US and in Brazil, Belgium, Croatia, Italy, Sarajevo, and the United Kingdom. A set of cards is also in the permanent collections of the Museum of Modern Art in NYC, the MoMA Wales and the Los Angeles County Museum of Art.

The project includes work from artists as famous as Yoko Ono as well as lesser known talents. The pages are of every kind of design imaginable, from personal and metaphysical to conceptual and abstract. The ABAD project has forged many new friendships among artists across the globe and has even spawned a handmade artists' magazine named Abalcabal.

WHAT IS DIFFERENT ABOUT THIS SHOW?
“RAY JOHNSON AND A BOOK ABOUT DEATH” is a new exhibition that will, for the first time, feature a copy of the original 1955 ABAD project by American artist Ray Johnson (1927-1995)–the inspiration for this entire series of exhibitions. It will set the stage for all 480 cards from the original Emily Harvey Gallery exhibit together with new submissions created especially for this show.

Ray Johnson’s unbound book of the same title was mailed to his New York Correspondence School students and included pages in his idiosyncratic style that were funny, sad and ironic “one-page essays” on death.

WHY IS THIS EXHIBIT HAPPENING AT C.W. POST CAMPUS of LIU?
Ray Johnson lived nearby in Locust Valley and was a frequent visitor to Hillwood Art Museum. He was a good friend of many artists who teach and work here and did several performance works on campus.

Several art alumni of Long Island University were contributors to the original New York ABAD project and would like other artists to become part of the rich worldwide art community that has grown up around the project.