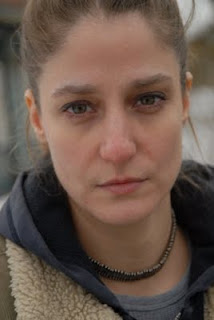 Photographer and author, Alix Lambert contributed a work to the exhibition in New York City, but the postal gods had other plans when the cards were mailed to the gallery. We've tried to rectify that by featuring her work and the story behind it, a fascinating investigation into The Body Farm, located in a dead corner of the state, a no man's land of a completely different sort.  Alix writes ...

Beyond a sign that states in simple, unadorned fashion – Anthropology Research Facility State Forensic Anthropologist – are barren acres of fenced-in land. Unremarkable at best.  There is a shed, an abandoned trailer, some trees, dirt paths that lead nowhere it seems.

Walking through this nothingness towards its center in the cold autumn air, one discerns rows of dark green garbage bags, laying side by side. You can laugh, almost; if you had to guess, they might be covering bodies. Twenty yards closer and you see yellow sashes wrapping around one tree trunk and running to the next. The unmistakable words CRIME SCENE are written in black.

And then you see, as if for the first time, what's really here: Skulls and an assortment of femur bones among the leaves, and bodies in varying states of decay. If you look very closely, that movement that you thought was a trick of the eye turns out to be swarms of maggots gnawing on the human remains.

The Facility, or The Body Farm, as it has been nicknamed much to the chagrin of some who work here, is dedicated to the study of the rate of human decomposition, a key understanding needed in murder trials.

The Facility was founded by Dr. Bill Bass and is affiliated with The University of Tennessee.  Although other “body farms” have been planned in the US, this one remains the only one of its kind in the world.

For a man who oversees the very end of the end, Dr. Bill Bass is all charm and smiles. Twice my age, he seems to have twice my energy. He's almost gleeful for someone who works all day with corpses. Standing on the Tennessee soil, bodies in varying states of decay all around us, he happily answered questions he's answered thousands of times over the past years. 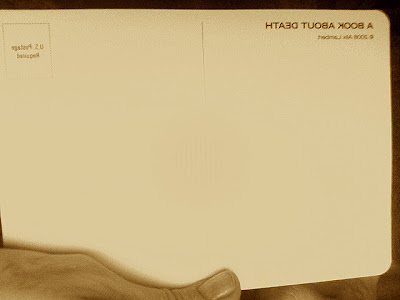 "We are not a culture of death," he says about how we as people tend to hide from view all that happens after we die. "Let’s say for example there were a body out on the road; someone was killed and thrown out on the edge of the road. The police are called. They come and they hold up a sheet so that no one can see what’s going on and everybody drives by looking and looking but they can’t see anything. Then the body gets put in a black disaster bag, again no one can see what they are doing. The body bag goes to the morgue; well they don’t give tours of the morgue, so no one knows what goes on in a morgue and if they ever do see that individual again it might be at the funeral - if they have an open coffin. But if they don’t then the person is buried and nobody ever sees it."

"There are so many things that happen after people die that we have closed off in our culture, and essentially said, ‘you can’t look at that.’ Bass goes on: "I think people wonder ‘what goes on behind those closed doors?’ I don’t know why we cover it up. Of course, there are certain cases in which you don’t want to let everybody know what happened. I don’t think you ought to let key evidence out, but I don’t see any reason why we shouldn’t go into great depth about what goes on.”

Dr. Bass allowed me to photograph the Body Farm, and the results have taken me on a very strange and sometimes beautiful journey, regardless of morbidity of the subject.

Conversations with some of the researchers at the body farm revealed narratives that one might only find in Hollywood.  One researcher, Joanna Hughes, recalls: "When I was in third or fourth grade, I remember, there was a person found somewhere in my home-town in a refrigerator in the woods, and somebody had done a facial reconstruction and that just kind of stuck with me. Then in the seventh grade, one of my science teachers asked what do we want to do when we grow up? And I said, 'I want to put faces on skulls.' I didn’t know what it was called. I didn’t know if it was a real job, I just knew that that’s what I wanted to do. So, here I am."

Joanna Hughes was adopted as a baby as was her brother; she grew up in Alabama, in the South. Her parents were very religious; she knew from the day her parents picked her brother up that he was evil, she said. During the course of our conversation, she went on to discuss the murder of her parents by her brother, who was sentenced to death in 2005, and killed himself in 2006. 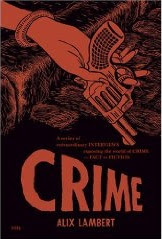 "As my brother’s last surviving family member, I made the decision to donate my brother’s body here to the facility. He did no good in life and if he’s just buried in a hole he won’t do any good in death. If he’s here he can do good for however long they have his bones. A lot of people don’t understand. They were asking ‘When’s the funeral? Are you going to bury him next to your parents?’ I don’t think they’re thinking it through. I really don’t care what they think. This is the best thing that he could possibly do. He’s doing it and I don’t have a problem with it."

I come to realize that we are interested in – or sometimes obsessed with – our own humanity, and the “vessel” that contains whatever we deem ourselves to be. The recognition, as I look at the bodies around me that, yes – this is my vessel, too.

The work I presented for the project, A Book About Death, comes from this series of photographs.  And, as fate had it, the photo post cards were either lost or destroyed in the mail, never making it to the exhibition. So, in a bit of black humor, I've exhumed them here, and would be more than happy to send a card to anyone who is missing one in their collection.  The remaining cards will be going to MUBE in São Paulo, in February, for the next chapter in this itinerant book about death.


Please contact Alix Lambert if you would like to have one of these cards for your collection from the exhibition.  Her e mail: lixilamb@gmail.com. Alix has a full text on her investigation of the body farm, and you will find it on her site. You will also discover her photographs and her book, CRIME. Click here: http://pinkghettoproductions.com/
Posted by MATTHEW ROSE at 7:34 PM

Alix, thank you for the post cards... I've posted a few for you. xx mt