Peter Ciccariello : Reflections On A Homeless Book About Death [40]

Peter Ciccariello, painter, poet and contributor to "A Book About Death," offers his reflections on his experience visiting the gallery with his wife Sandra...

[Photo: Sandra and Peter Ciccariello. Below, Peter's contribution to the project]


The idea was brilliantly simple: Artists would contribute 500 post cards each to create an unbound book about death to be exhibited at the Emily Harvey Foundation Gallery in New York City. Visitors were invited to assemble their own ‘book’ which was then an ‘exhibit’ in itself. If you had a complete set, you could, in theory, produce the exhibit in another town, another country, or in your own living room.

On Friday, September 18th, Sandra and I took the number six subway downtown to the gallery on Broadway determined assemble our own ‘book’. I was quite unprepared for the solemnity of the task, the boxes of cards were lined up in rows along the floor, the empty white painted gallery space, all referents suddenly to little coffins in a stark bright empty church. Both of us immediately began the process of collecting one postcard from each box.

With her disciplined eye for data acquisition, Sandra’s determined approach was to assemble a complete set, mine was to more or less let the cards speak to me somehow in a random intuitive way, and those would be our personal books. Both of us found immediately that there was so much more here than expected, and our silence spoke of how overwhelmingly profound the project and the process was. The experience was not unlike the grief, and bottomless, nameless emotions and contradictions of actually confronting the death of one’s lover, child, sibling, pet or parent, or even one’s own. Cards about unforgivable suicides, about being old and finally giving up, unexpected, unacceptable deaths, and quiet, welcomed ones. How each card represented that fine and private space inside us all, that space we would prefer to ignore and pretend did not even exist at all. 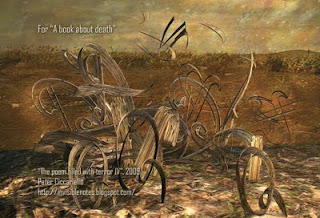 After about an hour and a half, we had our sets, two huge piles of cards balanced and unruly in makeshift plastic bags, the sharp edges poking out, almost violently, as if they had a life of their own, these cards about death, this formless, homeless book about death that I had now taken responsibility for, that I would lug all over New York City, back to Grand Central, and back to Rhode Island. Later, on the train, we went through the bag, one by one, sharing the most painful, the most joyous or the most horrifying. Finally coming to a sense that this was perhaps what death was all about. No beginning or end, just an endlessly unique, precious, and personal narrative told by those still living, carried on our backs forever, offered to anyone that has the sense and compassion to listen.


Peter Ciccariello is an interdisciplinary, cross-genre artist, poet, and photographer. His work is a pastiche of language and text in 3-D digital environments. His image “Poem filled with terror" was part of A Book About Death. Peter lives and works in Providence, Rhode Island.  Visit his web sites: http://invisiblenotes.blogspot.com/ and twitter feed: https://twitter.com/ciccariello

Email ThisBlogThis!Share to TwitterShare to FacebookShare to Pinterest
Labels: A Book About Death, Peter Ciccariello