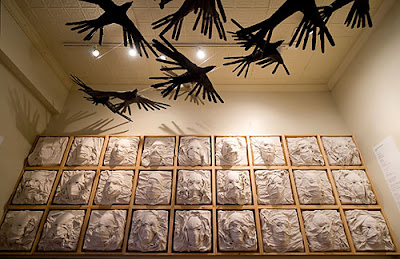 Fran Bull one of the formidable and well known artists to have contributed to the ABAD project, opened her full-on installation, In Flanders Field at The Woman Made Gallery in Vermont in January, 2010.

Gallery Assistant, Ruby Thorkelson, just published a piece about the exhibition as well as the fascinating job of installing this massive exhibition.  See Ruby Thorkelson's article, click here (and many many photos).

"In Flanders Fields is an epic and elegiac hymn composed of subtle yet powerful notes reminding us of the constant interplay between life and death, not only on the world stage, but in our own day to day lives."   – excerpt from B. Amore review for Art New England Magazine .

"I feel like I am part of it. I can feel the mourn of all the souls that could have died in all the battles that the world has had. It gives many people a vision of sadness and the bad things that hatred can bring upon people." – From the Guestbook at the exhibition.

Email ThisBlogThis!Share to TwitterShare to FacebookShare to Pinterest
Labels: A Book About Dearth, Fran Bull, Vemont Artzine, Woman Made Gallery