Billie Maciunas: The Eve of Fluxus [108] 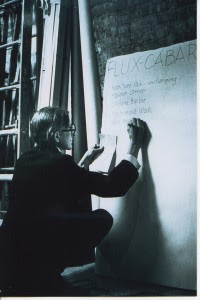 Billie Maciunas has graciously contributed a copy of her new book, "The Eve of Fluxus," to the Ray Johnson and A Book About death Permanent Archive. The book is a memoir of Billie's meeting and marrying George Maciunas, founder of the 20th century art group Fluxus. This group influenced Ray Johnson and many of the contributing A Book About Death artists.


Writes author Billie Maciunas: "The Eve of Fluxus: A Fluxmemoir is published by Arbiter Press, an independent press in Orlando, Florida. The book is 131 pages, measures 6-inches x 8-1/4 inches, and includes photos by Hollis Melton of The Flux Wedding and the Black and White Piece that George and I performed for the Flux Cabaret on February 25, 1978. 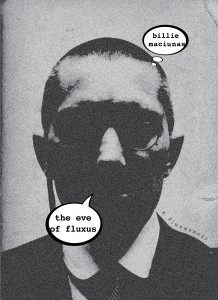 "The book cover and all photos are black and white as an homage to George’s graphic style and the fact that he was color blind. It is primarily a love story as told by an itinerant poet who was profoundly changed by association with and marriage to George. In writing the book I tried to associate George’s personal attributes with those he possessed as an artist. The subtitle, a Fluxmemoir refers to the style of the book, which crosses scholarly, fictional, poetic, and nonfictional genres."

The book has three covers, “Bubble,” (pictured), “Silo,” and “Bullet,” designed by D. S. H. Watson, Orlando, Fl. You can order the one you like. See: On The Eve of Fluxus site for all information.

Email ThisBlogThis!Share to TwitterShare to FacebookShare to Pinterest
Labels: A Book About Death, Billie Maciunas, Geoffrey Hendricks, George Maciunas, On The Eve of Fluxus, Ray Johnson