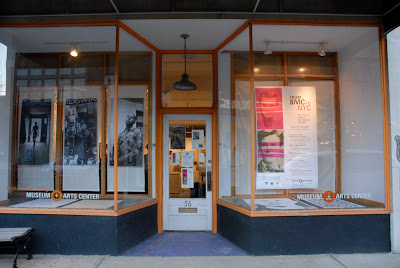 A very large and impressive exhibition of Ray Johnson's work from 1943 to 1967 recently closed at The Black Mountain College in Asheville, North Carolina.  Curated by Sebastian Matthews, the exhibition generated a tremendous amount of interest thanks not only to Matthew's Ray Johnson Show blog about putting the show together, but also by John Dancy-Jones' blog, Raleigh Rambles which covered a good part of the activity.

Frances Beatty, director a Richard Feigen Gallery in New York, and one of the key guardians of The Ray Johnson Estate, gave a talk in May 2010 on the adventure of actually putting up an exhibition with Ray Johnson.  A 48-page catalog was also produced, and is available from Black Mountain College. 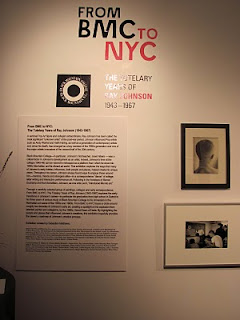 From the Black Mountain College site on the exhibition: The Black Mountain College Museum + Arts Center (BMCM+AC) will present the exhibition From BMC to NYC: The Tutelary Years of Ray Johnson (1943-1967) beginning February 19th, 2010, and running through June 12th. In addition, we will host related programs, including a guest lecture, a film screening of the popular documentary How to Draw a Bunny, a collage workshop by Washington DC collagist Krista Franklin and an opening-night performance by Graham Hackett and Poetix Lounge. An exhibition catalogue will be available for purchase.

A seminal Pop Art figure, Ray Johnson has been called the most significant "unknown artist" of the post-war period, a "collagist extraordinaire" who influenced Pop artists such as Andy Warhol and Keith Haring, as well as a generation of contemporary artists. Since his death, however, Johnson has emerged not only as a key member of the 1960's generation, but as one of the major artistic innovators of the second-half of the 20th century.

Black Mountain College—in particular, Johnson’s first teacher, Josef Albers—was a critical factor in Johnson’s development as an artist. Indeed, Johnson’s time at the college can be viewed in retrospect as a platform from which he dove into Manhattan and its vibrant art world. Our exhibition will explore the ways that many of Johnson’s early tutelary influences, both the people and the places, helped create his unique vision. Throughout his career, Johnson always found ways to engage those around him—mentors, friends and strangers alike—in a correspondence “dance” of collage, letter writing and interactive performance art. Following in Marcel Duchamp’s footsteps, Johnson, as one art critic put it, “introduced life into art.”

Through a carefully selected group of paintings, collages and early correspondence, From BMC to NYC: The Tutelary Years of Ray Johnson will explore the early transitions in Johnson’s career—in particular his graduation from high school in Detroit to his three years of serious study at Black Mountain College to his immersion in the Manhattan art scene of the 1950s and 1960s. From BMC to NYC, curated by writer and collage artist Sebastian Matthews, will trace a circle around roughly two decades of Johnson’s early art, creating a spotlight on his explosion from talented painter and master collagist to, by the 1960s, Grand Dean of Dada & Postal Art. The exhibition will provide an interactive, playful presentation of Johnson’s “tutelary” work, highlighting the people and places that influenced Johnson’s creations in order to give the viewer a roadmap of Johnson’s creative process.
The Black Mountain College Museum + Arts Center is an exhibition space and resource center in downtown Asheville dedicated to exploring the history and legacy of the world's most acclaimed experimental educational community, Black Mountain College. Over the course of its 24 year history, Black Mountain College attracted and created maverick spirits, some of whom went on to become well-known and extremely influential individuals in the latter half of the 20th century. Even now, decades after its closing in 1957, the powerful influence of BMC continues to reverberate.