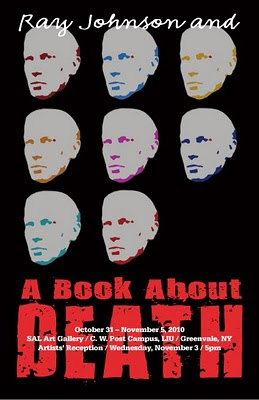 The series of exhibitions for A Book About Death has generated nearly two dozen posters, some plucked from the original postcard pieces to the New York City exhibition, and others created by talented artists specifically for subsequent shows.

Each poster is offered free as a downloadable PDF to any and all, and they serve as vivid and historical markers in the global rolling out of the project.

Co-curator of the CW Post exhibition of Ray Johnson and A Book About Death, LuAnn Palazzo created the first poster for this fall exhibition.

The artist call for CW Post, well underway, is the first that directly involves Ray Johnson's name and refers to his elegant and simple "book" A Book About Death.  Here, a generous handful of Xerox copies made from drawings and texts, were sent through the mails in loose format.  Those pieces will be on view at The SAL Gallery, C. W. Post College, Brookville, New York.  October 31 - November 5, 2010. 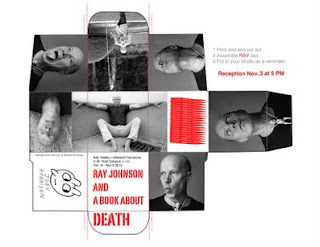 Launched by Joan Harrison, artist and friend of Ray Johnson who made dozens of photographs of the late artist, the CW Post exhibition has already attracted enormous local attention.  Ray Johnson frequented the CW Post campus and was very well known to literally thousands of people on Long Island.  Joan Harrison designed the invitation to the exhibition, right, using her photographs of Ray Johnson taken over the years they were neighbors on Long Island.

Down load LuAnn Palazzo's poster for Ray Johnson and A Book About Death.
Posted by MATTHEW ROSE at 6:47 AM