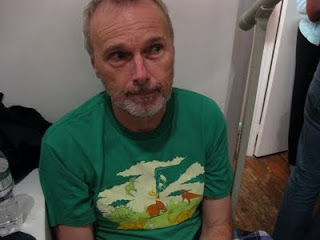 Of the many performers and artists at A Book About Death, only a handful expressed a view about the take down of The World Trade Center towers.  Michael Andre, poet, publisher, writer and contributor to theartblog.org, took up the subject with his piece ANOTHER 40 MINUTES AND 33 SECONDS rewritten.  Here it is:

As Allen Ginsberg was known as the Beat poet, John Cage was the Silent composer. His most famous work is 4’ 33” of Silence.

I published a lot of Cage’s writing. On the morning of 11 September 2001, I had it all in the Kinko’s on Reade Street, and was determined to make it into a book. But the building shook. I said to myself, “Gas explosion. Someone’s been careless.” I looked out the window. There were flames a couple blocks south. Damn careless!  I resumed my work with greater care. Eventually there was another explosion. Parts of the World Trade Center bounced off the window. People outside were running.  Only the cashier and I remained in Kinko’s. “Oh my God,” she said on her cell. “Oh my God, oh my God, oh my God.”

I danced the John Cage Waltz starting precisely at 3:00 pm 10 September  2009 at the southern foot of Trinity Place and then concluding north of there in the middle of James Street at 3:40.33pm. I walked silently past the site of the WTC. It was a mediation and a mourning. I mourn John Cage and Emily Harvey and my mother who died March 6 and the victims of 9/11 and the many more victims of miasmal America’s horrible revenge.

I walked to a waltz composed by Elodie Lauten. It was a mournful procession. I entered St James Church at the last second.

Photo of Michael Andre at The Emily Harvey Foundation by Jennifer Zoellner.
Posted by MATTHEW ROSE at 6:09 AM